It sounds like air is not the kind of thing you could “scrub,” yet “air scrubber” is the name of one of the most advanced types of air cleaning systems available today. Originally, it was called air scrubber because liquids were used to “scrub” the air of gases like carbon dioxide. Today, there are both wet and dry air scrubbers.

The major reason to use an air scrubber over conventional air filtration services is to eliminate harmful gases. Air scrubbers are popular at businesses where a lot of unpleasant fumes may accumulate during operation – nail salons, printing presses, or anywhere where cigarette or other smoke may accumulate.

Air scrubbers can be the optimal solution for homes with distinct pet odors, tobacco smoke, the smell from a fireplace or local fires, or located in damp environments with growing mold spores. Air scrubbers remove all these harmful gas pollutants and unpleasant odors, capture mold spores, dust, pollen, and other very fine particles.

As an air cleaning device, air scrubbers utilize the “search and retrieve method” to eliminate contaminants in indoor air. As air flows through the duct sealing systems, the air scrubbers continuously produce negative ions. Those negative ions are sent out on a mission to find and bring back pollutants floating in the air that are too small to be captured by the standard air filter.

Once negative ions are in the air, they seek to match up with positively charged particles, like bacteria, pollen, or other allergens. When negative ions and positive particles bond, they create larger, heavier particles that can no longer float in the air. Instead, they fall to the ground or on surfaces. When your air handler’s fan is turned on, it will pull the newly formed, larger dirt particles through the ductwork system, ultimately captured by the air filter.

The Air scrubber installation is a special air cleaning system that uses certified space technology that NASA originally developed for use in space. Air scrubber technology purifies the air using special germicidal UV light waves in combination with a catalytic process that sends out “enviroscrubbing” molecules of oxygen and hydrogen. These are nature’s own “air scrubbers.”

With germicidal UV light, the air scrubbers system destroys the composition of smoke, gases, and other toxic compounds. When tuned to a 254nm (nanometers) wavelength, UV light kills viruses, mold spores, and fungi.

Let’s take a cost vs. benefit approach to air scrubber installation. Making your home’s air high quality indeed requires certain costs. But when you consider that it’s a one-time investment with relatively low ongoing maintenance costs and that it pays out benefits continually – the air purification system is indeed worthwhile.

Whether you get an air scrubbers system on its own or with a UV air cleaner, you will see benefits in the following ways:

The cost of air scrubbers technology depends on the size of your home and the HVAC system. Given the high costs of HVAC repair and utility bills, combined with medical costs, it is well worth the investment. The benefits of an air scrubbers system significantly outweigh the costs.

Conventional air purification systems use passive technology to circulate the air through the filtration system. However, the standard system doesn’t clean surfaces that carry millions of germs on doorknobs, toilets, kitchen counters, and pet areas. Air scrubbers clean and disinfect the air and surfaces of your home, reducing nearly all surface micro-organisms and airborne pollutants.

The Air scrubber installation system is validated by numerous tests by highly regarded labs. Scientific studies have proven the safety and effectiveness of air scrubbers. It is clinically proven to reduce dust, mold, pollen, and many other indoor air contaminants.

Air Scrubber does its cleaning actively: where most air cleaners and purifiers only affect the air that passes through them, the air scrubber system sends out “enviroscrubbing” molecules to all parts of the house, meaning that your whole home receives air purification.

Air scrubbers don’t just treat the air, they clean surfaces of your home, such as countertops, bathrooms, kitchens, and doorknobs. Air scrubber is designed to fit into your existing HVAC system, installed directly into the forced air ductwork.

Even contaminates that hide underneath cushions and rugs get found and eliminated by the charged ions. The charged “air scrubbers” get rid of microscopic impurities that are invisible to the human eye.

Air scrubbers improve indoor air quality. It is designed to clean the air and disinfect surfaces inside your home or office. It eliminates airborne contaminants and stationary microorganisms.

While standard air filters capture larger airborne contaminants, such as dust and dirt, the air scrubber system actively cleans the air by releasing “air scrubbers” to reduce levels of volatile organic compounds, contaminants, mold, odors, and pollutants in the air and on surfaces.

Instead of using air fresheners, which add chemicals to the air, air scrubbers reduce airborne toxins in a natural manner. When you turn on the AC unit, furnace, or fan, the air scrubbers get to work, cleaning the air and surfaces with air scrubbing technology.
Air scrubber cleans, freshens, and purifies the air, including odor-causing bacteria and odors by pets and cooking.

When vital components inside a furnace or AC are dirty and neglected, the unit works longer and harder to meet the indoor load. This raises utility costs and can lead to premature equipment failure. Air Scrubber helps keep vital system components clean and reduces the likelihood of an unexpected malfunction, especially during extreme weather conditions.

Air Scrubber Installation extends the life of your HVAC system by trapping dirt, dust, and other debris before it enters through the filter, preventing damage to coils and blower that keep the system running effectively. This translates to the longer-serving HVAC system, easy maintenance, fewer repairs, and lower energy bills. 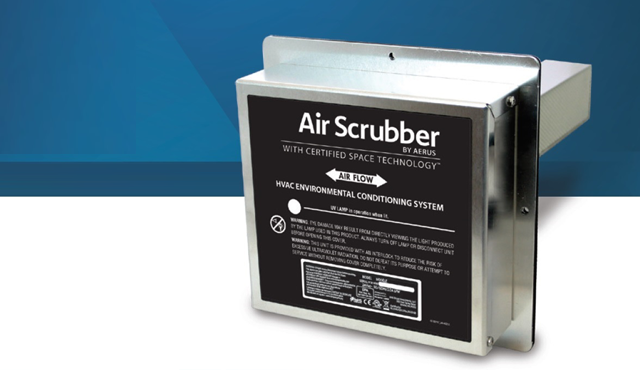 Why Choose Allstate Service Group For Your Air Scrubber Installation

Air scrubber installations are widely used in many indoor facilities – residences, hospitals, daycare clinics, and many other indoor spaces

We know the market on-air scrubbers and which models are best and which are more appropriate for specific situations. We pride ourselves on professionalism and integrity – delivering the highest quality workmanship, in a reasonable amount of time, on the customer’s schedule.

Our general contractors in Las Vegas have thorough knowledge and experience with air scrubber installation and other types of air cleaning systems. They will assess the quality of air and provide for an informed decision on how to improve your home’s air quality.

Call us at (702) 518-4720 to learn about air scrubber installation and replacement systems that comply with all building codes and requirements.